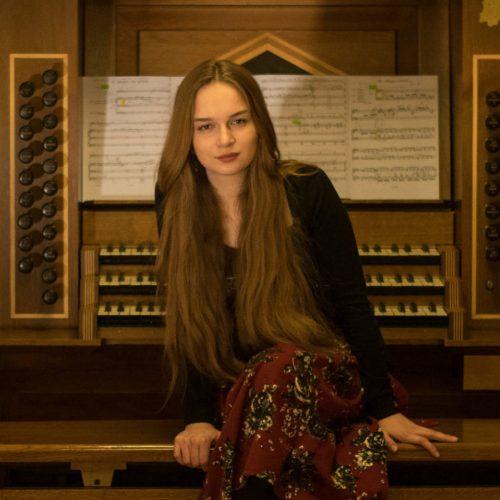 She is one of the youngest concert-level organists in the world, having started her career as a soloist at the young age of 13. She was a student in the Central Music School at the Moscow State Tchaikovsky Conservatory, studying the piano as her main instrument and the organ additionally. At the age of 15, she began her tenure as an undergraduate student first in the organ classes of her long-term tutor Prof. Alexey Parshin, then those of Prof. Lubov Schishkhanova, going on to graduate from Moscow State Tchaikovsky Conservatory with an M.A. While still undergoing her education in Moscow, she commenced undergraduate studies at the University of Music and Performing Arts Graz (Universität für Musik und darstellende Kunst Graz) in the organ class of Prof. Gunter Rost, completing her soloist bachelor degree in one year with the grade of “perfect score, unanimously”. After that she was nominated for a Begabtenstipendium der Stadt Graz. Currently, she continues to further her studies at the university.

Ms. Igoshina has been awarded with first prizes at both national and international piano and organ competitions.

Ms. Igoshina is a known participant of the International Charity “Moscow Meets Friends” Festival of Vladimir Spivakov, the “Deutch-Russische Freundschaft” festival in Germany, the “Paskefest in Bergen” festival, “Gulantingets Paskefestival”, ‘Bergen International Organ Festival’ and “Bergen orgelsommer” in Norway, “Orgelfrühling Steiermark” in Austria and others. She has also been awarded with a diploma of honour by the city council of Halle (Saale), Germany. She regularly takes part in concerts at the Moscow State Conservatory and cycles of charity concerts in Burdenko Central State Hospital and also regularly performs at recitals all over Russia and in Germany, Austria, Norway, Hungary, Armenia, Macedonia, Poland, Slovakia, Belgium, etc. Her recordings were used on Organroxx Radio (Belgium) and she has performed live on Radio Maria (Austria).

Ms. Igoshina is a Piano Instructor with PANDORA MUSIC STUDIO.